Getting started with MongoDB on Windows is very easy.

To install MongoDB on your workstation, just follow these three simple steps:

For Windows 7, you want the version named "Windows 64-bit 2008 R2+" located here. For Windows 7 and Windows Server 2008 R2, it is also recommended that you install this hotfix from Microsoft dealing with memory-mapped files. More information is available here. 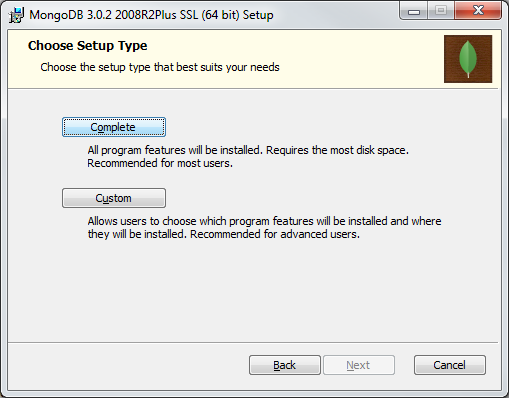 For example, at the command prompt just enter:

3. Tell MongoDB to run as a Windows Service

From a command prompt, set your current working directory to the folder where you just installed MongoDB. If you used the typical, default installation options, then the command would be:

Now that you are in the MongoDB "bin" folder, tell the Mongo "daemon" process (mongod) to install itself as a Windows Service:

And finally, start the MongoDB service:

You should see the message that "The MongoDB service was started successfully." MongoDB will now be running on your workstation and available at all times, even after you reboot.